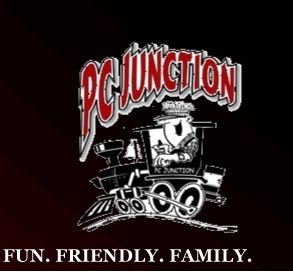 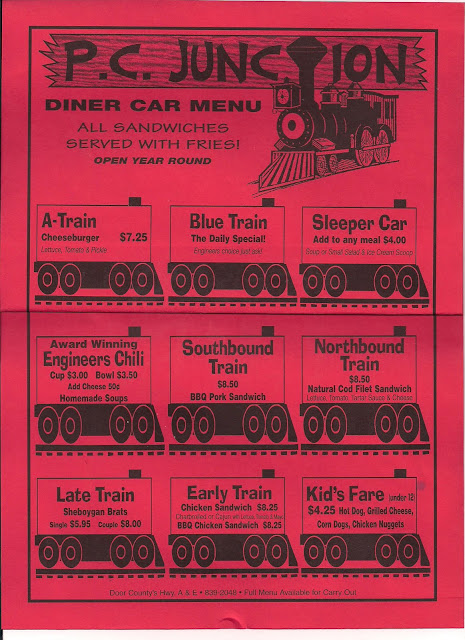 I ordered the mini corn dogs from the “Kid’s Fare”. They were OK but I would not say they were great. I thought that they were too battery. They tasted better than some of the corn dogs I have had at school. I think they made them at the restaurant. I didn’t think they came out of a box.
Service 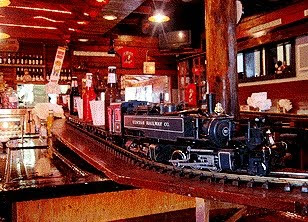 The best thing about the service was that your food was delivered on a toy train. You sat at a bar (which is what I did with my family) and our food came around to us on a model train car. When we sat down they gave us the name of a city or town in Door County and that is how we knew when our food was coming. We were Fish Creek.  The train was cool because they also had stuffed animals and bubble blowers on the train while it was going around. The bubble blower was fun...but the bubbles landed on your food sometimes. I didn’t think our waitress was paying that much attention to us kids and asked my parents what I was going to have.
Fun 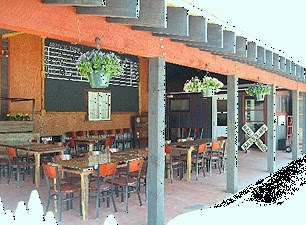 The fun part was awesome!! There was a place called the P.C. Junction Sugar Shack across from the restaurant. It had a Hoop Shoot game and a ginormous chess set. There were pedal go carts on a race track. It was raining the day we were there so it was really muddy and FUN!! They had a pig farm with 3 big pigs. My sister slid down a muddy hill and almost fell on her butt. That was funny too!! They had a tub filled with chicks that you could pick up and hold. They also had a video arcade. The restaurant gave us one of those buzzer things to let us know when our seats were ready. We went over to the Sugar Shack while we were waiting. They have a place to get drinks there too.
Posted by Logan Westberg at 7:22 PM No comments: Links to this post


Last night I went to Chuy's Baja Broiler with my family. We go to Chuy's almost every week and it 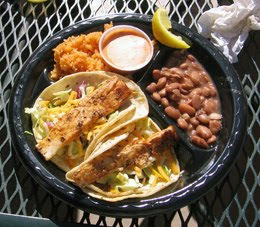 is one of our favorite restaurants. Because we go there so often I have tried pretty much everything on their menu. Their chicken is really good. Last night I decided to have something not on the kids menu. I had the full fried fish tacos. They come on either flour or corn tortillas with fried fish, cabbage, cheese and "baja sauce". I like the baja sauce and its a little sweet. I usually order the tacos without cabbage but that is up to you. The fish was crunchy on the outside and soft on the inside. it was really good!


In Chuy's you place your order at the cash register and they give you something to tell them how to find you...usually a stuffed animal, a colored cone or something. Then they bring your food to you at your table. The food last night was hot like it was supposed to be. We had a lot of people with us and everyone got their food really fast. We get to have as many tortilla chips as we want for free. They also have different stuff to put on them like jalapenos, salsa, and baja sauce. Refills are free too. All I had to do was ask at the register and they refilled my cup. Even when I go up by myself. They are also good about giving me change for video games.


Chuy's has a one page kids menu with basic stuff to do (tic-tac-toe, a word search and a connect the dots). They have had the same stuff for a really long time (they might want to change that). They also have lots of video games like Tekken III, pinball, The Fast and the Furious, a crane game and Super Hoops. The also have a really cool ice cream machine that uses suction to suck up your ice cream and drop it down to you.
Posted by Logan Westberg at 3:48 PM No comments: Links to this post

4.95
Grilled Chicken with Pasta* Grilled chicken breast with sides of steamed broccoli and spaghetti with tomato sauce
5.35
Italian Cheese PizzaFirst topping is free, additional toppings .40 each
4.95
Spaghetti* Topped with tomato sauce
4.65
Chicken FingersLightly breaded, served with steamed broccoli or fries
5.35
Cheese Ravioli Italian cheese-filled ravioli with tomato sauce
4.95
Fettuccine Alfredo*Fettuccine served with a parmesan cream sauce
4.95
Today I went to the Olive Garden® after I went to church. I have been to the Olive Garden before and I think they have good food. I try to get something different whenever I go so today I decided to try their maccaroni and cheese. I was afraid they were going to serve me box maccaroni and cheese but it was actually pretty good. It was the shells kind of maccaroni and the cheese was really creamy! I also tried my sisters angel hair pasta and my dad's Zuppa Toscana soup...both were really good!
Service
Our waiter's name tag said Steven but he told us to call him "Slim". He was nice and friendly. He treated me like a man and called me "sir" whenever he asked me as question. He kept on coming back to my table and asking us if we needed anything. He wasn't just asking my dad either...he was asking me and my sister, too! When he told us about the kids menu he told us about stuff he thought I would like like a Strawberry-Mango Limonata that had real strawberries floating in a lemonade drink.
Fun
Their kids menu is called the Passport to Fun. It's a really fun menu with lots and lots of stuff to do. It folds out and is huge with crossword puzzles, pictures to color, word searches and madlibs. If you did everything on the kids menu it would last you through lunch.
Posted by Logan Westberg at 5:45 PM No comments: Links to this post

Whenever you are submitting a critique of a restaurant kid's menu use the following format...

* Name and address of restaurant (Include City and State)

* Menu Item being reviewed [Include comments on originality of the dish, taste, etc. (Generic grilled cheese is not original!)]

* Service (Was your food hot? Did the waiter treat you like a little kid or a paying customer?)

* Fun (Are there fun things for a kid to do at this restaurant...do the have a good kids activity menu...do they have video games, etc.)

Finally, rate the restaurant from one to five pizza slices

Logan Westberg
Arizona, United States
I am a 10 year old kid tired of bad kids menu's. I think that if I start telling everyone about good and bad kids menu's that maybe restaurants will start paying more attention to us kids!! If you want to rate a restaurant, follow my format, send me an e-mail and maybe I will post it! If you want to, include a picture of yourself for posting with your critique. (My dad will be helping me with some editing and technical stuff.)